After our five day stay in Corfu, we loaded up the car and set off to other parts of Greece.  Our ultimate goal was to another beautiful island on the Ionian Sea.  There was no connection from Corfu so the ferry took us back onto the mainland and we followed the coast south to Parga.  The photos I’ve seen of Parga were of a pretty coastal town on the western coastline, so we headed down that way.  Curvy roads took us there and the first sight of this town was picture perfect.  Once again, the hotel we booked on that same online booking site, proved to be closed.  And once again, the owner was kind enough to call us and tell us of a B&B that was open and would be able to take us in.

We got to the B&B after crawling up tiny roads where we had to back out three times because there really was no room for us to move forward.  People here drive tiny cars!  An old lady saw us – Zaf inching his way forward as I walked along the car searching for this place – she guided us towards it and the hostess just happened to be outside.  She greeted us warmly and her husband ran out to help with the suitcases.  We climbed up the stairs into a lovely room with a modern kitchen and bath that was very accommodating.  The refrigerator was filled with breakfast fare – eggs, cheese, ham, butter, marmalade, sliced bread – as well as orange juice, water, beer and wine.  The cabinets had coffee, tea and all the fixings.  A large bowl of fresh fruit was on the counter.  Each morning, the hostess knocked on the door and brought us freshly baked breakfast bread.  The large balcony was the perfect sight for our dinner delivery as well as hanging out and breathing the fresh clean air.

Parga has two coves so we drove to each one and admired the beach, the sea and the lovely homes, once again built up and against the mountains.  A large waterfront allows for good healthy walks as we browsed in the few shops that were open.  The Kastro loomed high over the cove as it stood guard over the town.  One day it rained, so we stayed in our room and balcony.  By early evening, the rain was coming down really hard; thunder boomed and lighting struck!  We played cards on the balcony and laughed through it all.  We left with a promise to return to this charming little place; about ten minutes out we got a phone call from the host asking if we mistakenly took the key with us.  Yikes!  I did…we told him we’ll bring it back.  Once we got there again, the hostess was waiting with another handful for breakfast bread she made for us for our trip.  Such wonderful, gracious people!

A big town – totally unexpected.  It has large streets with an abundance of stores and office buildings, a fairly large port and a charming waterfront strand.  We drove through it and stayed on course going south along the water.

Veering inland for about 20 minutes, we got to the monument of Zalongo.  Up, up, up into the mountains to a forested area, a monastery is tucked away barely visible until close up.  We did not enter as we have been here before.  The monument of about 300 women who fell to their death to avoid abuse, slavery or slaughter from the Ottoman enemy, carrying their children in their arms, is right above us on the mountain cliff; when we last saw it, it was being renovated.  I was told by a nearby villager that 2 girl babies survived.  And now it proudly stands as a testament to the call of Independence: Freedom or Death.   The famous song commemorating this event was danced to by me and my classmates while in Greek school so many decades ago.  Every Greek child learns about these brave women as part of our history. 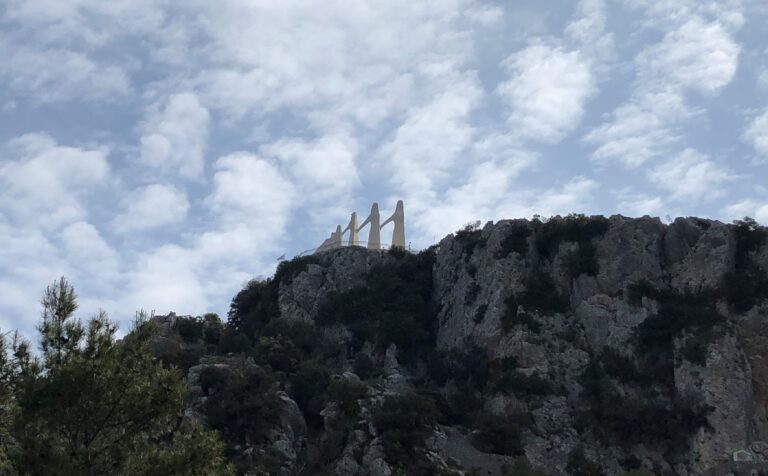 When I say: “We got to Rio” you probably think I’m talking about the city in Brazil, but I’m not.  Rio is the name of the bridge that connects mainland Greece to the Peloponnese Peninsula.  Just past Messolonghi, where Lord Byron died in a massive battle fighting for Greece’s independence, you see the bridge from a distance.  This area of Greece is full of history and sits as Greece’s most important sea link with the rest of Europe. Crossing under the steel vertical arches is one of my favorite things to do; we’ve done this a number of times and it is always awe inspiring.  Some people even choose to walk across on the pedestrian walkway!   We get across into the town of Patras, Greece’s third largest city.  We got lost here one time, so now we know to avoid the center of town; we headed south once again, hugging the sea.

We Got The Ferry!

What looks like a short distance on the map sometimes takes longer than expected, especially after being in the car since early morning and it was now late afternoon.  Signage is often confusing.  They’ll post the name of the town that comes AFTER the town you want, so if you didn’t know that name, you had no idea if you were going the right way or not.  Once or twice we asked for directions and thankfully we were.  Slight rain didn’t help.  To say that we were concerned that we would miss the ferry would be a true statement.  Finally, after about an hour and a half, the signs to our destination materialized and we got to Killini, the port town where ferries go back and forth to our next stop: Kefalonia.

Retirement exploring can be fun, can be interesting, can be nail-biting – just the way we like it!

Photograph of Parga From the Personal Collection of Helene and Zaf 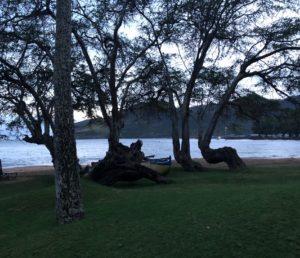 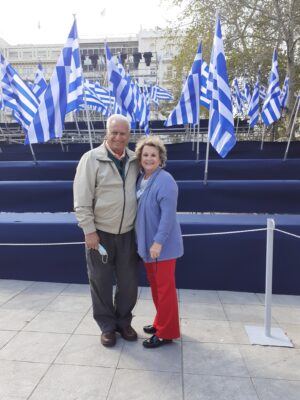