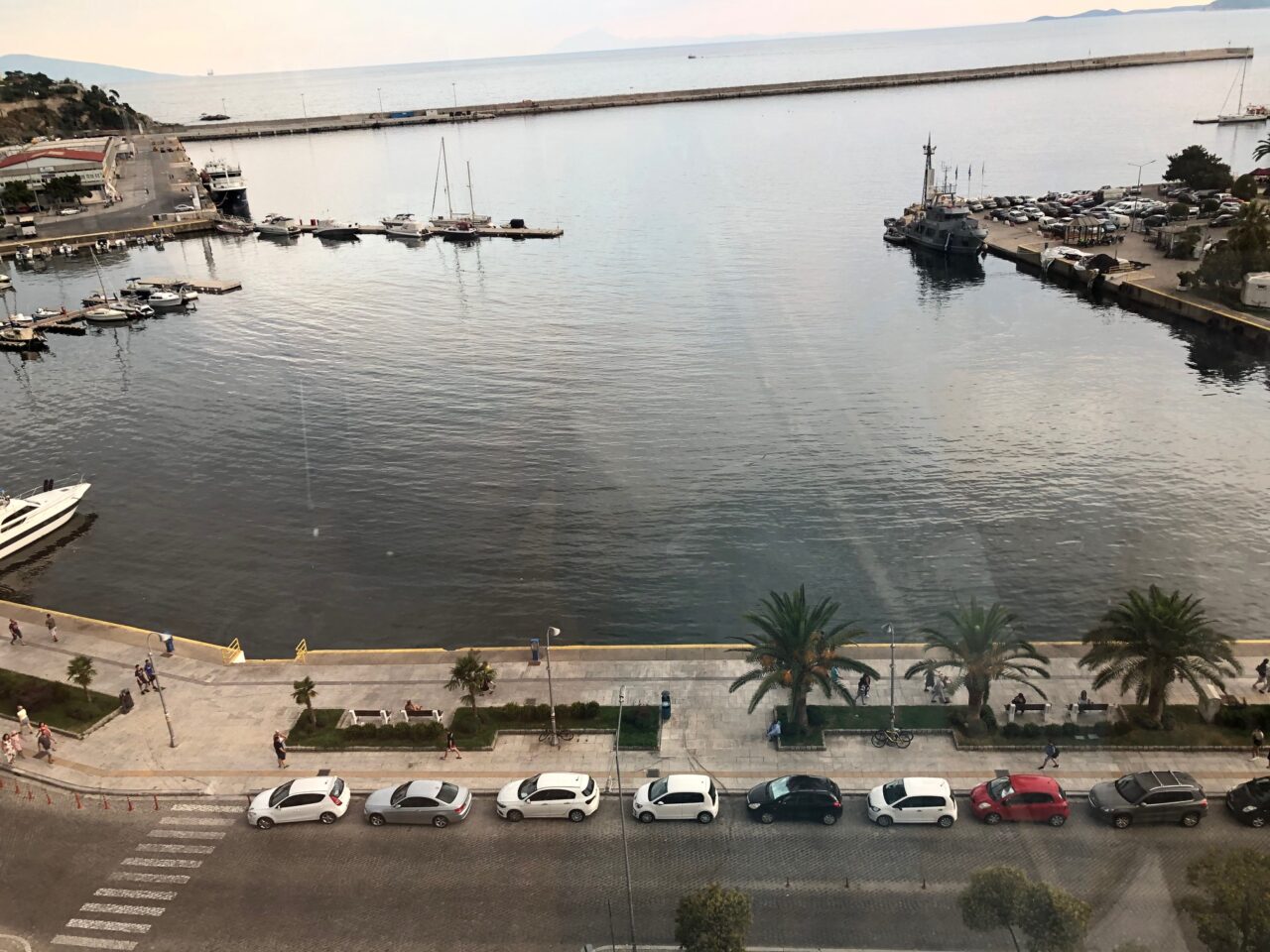 EVIA
After an overnight ferry ride back from Crete, we drove about an hour and a half north of Athens to the island of Evia. We settled in our hotel outside of Eretria and planned our excursions. This included plenty of down time relaxing around the pool and on the beach.
A pretty island with lots of curvy roads along the coast gave us views of sweeping beaches and coves on one side. On the other side were fields leading up to white homes tucked into green mountains. We stopped at a taverna on a cliff for lunch before we headed back to the hotel.
The beach town of Eretria was fun! It’s a really small place with one street of shops along the water. There were so many seafood tavernas that offered up delicious food and views of the clear blue sea. Looking for a hat was a delight – a number of shops had them, but I wandered into one at the suggestion of a man sitting in a small café. What a place! It was filled with beautiful home décor, clothes, shoes, bags, hats, jewelry, and anything you could imagine. The owner is a lovely woman with a great smile and personality. She spoke five languages! I tried on a couple hats but it wasn’t till she pointed out one that I knew was the right one! Truth told, Zaf had seen it and told me to try it on, but I rejected it – and what a coincidence it was the one I bought!
She escorted us out to the street, where my eye caught the eye of the man who suggested I try that store; I smiled while pointing to the hat on my head. She said “Ah, here is my husband!” He stood and said “welcome”. Then showed us the shop next door filled with absolutely stunning jewelry – I mean filled!!! One table after another showcased his personal designs in gold, silver, precious and semi-precious stones. All colors and gems gleamed throughout. I don’t remember how long I was there, walking up and down the aisles, but it was a really long time. We bought a few items for ourselves and for gifts. She then walked across the street with us and introduced us to the owner of the taverna to make sure we got the best fish in the place. Zaf chose it from a tank right there in the entrance!
We relaxed for a couple of days, then back over the bridge to Salonika, our home base. Here is where we re-group: laundry, car maintenance, emails, and computer calls to family and friends. Then, off to our next stop.

KAVALA
A great harbor city dating back to the late 7th century B.C. It is the center of trade and tourism in the northern part of Greece as well as a major seaport. Roman and Ottoman empires ruled here throughout the centuries, and you can see remnants of their influence, especially in Old Town which lies on the foothills of the great Byzantine Fortress. We climbed to the very top in a previous trip, so this time we admired it from afar. Dinner one night was the very bottom of it facing the sea.
Built in a u-shape, Kavala has a great walking strand where you can stretch your legs and enjoy the scenery. Little boats close in while larger ones further out. At one end, the ferry boats come in and out to drop off people and cars while picking up those who want to go to other islands. Our hotel was right there in the harbor so we saw the sun every morning as it shone across the bay of Kavala.
A bustling city with good restaurants and shops; there were people everywhere going and coming from work, eating out at night, and simply sitting at a café with friends. This was our third trip here because, well, we love it here!
THASSOS
We drove from Kavala to Kithera, about 30 minutes away to take the ferry to Thassos. From the first glimpse, we noticed that it is not like the other islands we visited. To begin with, it is very green with very tall mountains. From the port, there is only one road in and out. We took it and began the ride on the east side of the island, going south to the town of Limenaria. Just before we got to it, we pulled into our hotel.
Another pretty little beach town, where once again, we had fun! An entire street filled with stores and cafes. I spotted one incredible jewelry shop, but Zaf pulled me back! I guess he felt that enough is enough! We did walk through the long street a few times though and stopped to eat at the numerous tavernas on the other side of the street along the sea.
Some stores had entrances from both the shopping side and the sea side so we used them often to go through. One such store was an arcade with a variety of games. One night, when there weren’t any children around, we played table hockey to the amusement of the people passing by – my shrieks calling out to them, they laughed out loud. We had to return one more night, just for the sheer pleasure of being kids again. For those interested: we tied the first night and Zaf one the second night.
A drive around the bottom of the island and up on the west side of it was long, winding and very green. You do not see the white washed buildings dotting the coastline or in the mountains as much here. It is lusciously filled with foliage in various shades of light and dark greenery.
The most enjoyable part of exploring Greece is seeing the beauty up close. Zaf and I are in agreement, that we have indeed Retired Well, Helene 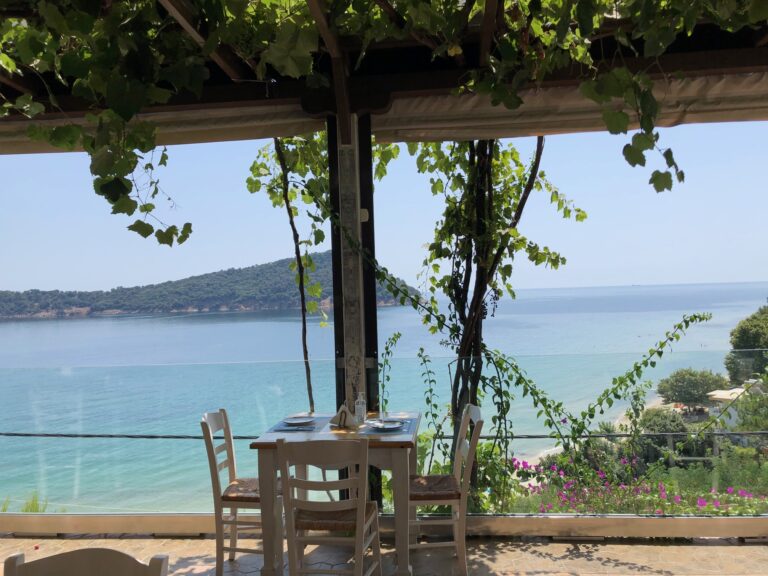 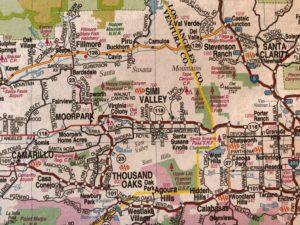