A ferry ride away from Ighoumenitsa, just west of Ioannina where we stayed last is the beautiful island of Corfu aka Kerkyra in Greek.   We arrived mid-day and with map in hand we drove to our hotel going south to an area called Perama.  Driving along the curves along the blue Ionian Sea showed us various places we made note of to come back and take photos – tired as we were we drove on.

No place at the inn

Our hotel looked lovely – only problem was that is was closed!  Looking through the windows we saw signs of renovations taking place and not a soul in sight.  I called the number on our confirmation and a young man told me that they were not ready to receive guests.  I explained that we had made a reservation through a popular booking site and he apologized profusely.  He asked if he can help us in any way; I said no, we would just drive around till we found somewhere else to stay.  We turned around and heading back to Corfu Town, the center of the island.  I did call him back the next day to make sure we were not charged; he assured me that we were not and then became totally adamant on how he wants to help us find good accommodations or anything else we needed – he apologized profusely once again and gave us warm regards for a wonderful stay in Greece.  A very nice young man indeed.

I remembered that over four decades ago, my two young friends and I stayed in an area called Dassia where we partied with people from all over the world!  With a vague idea of where it was and confirmed when I saw it on the map, we headed towards it.  We spotted a hotel that was open, but decided to keep going up towards the beach.   Numerous beautiful hotels are all over this area – alas, they were closed, so we went back to the open hotel we saw previously and checked in.   Very nice, very comfortable and very hospitable people.  With that out of the way, we planned our days ahead.

One of our outings was locating the exact spot of the hotel and restaurant with a pier from all those years ago; hard to find as much has changed; hotels and homes have been built, memory can be faulty – but eureka!  A sense of déjà vu came over me as we went through little dirt roads and between the trees and yes, we found it!   A flood of memories came up as I pointed to different spots along the beach and told Zaf the stories of that summer in Dassia.

History tells us that Corfu dates back to 775-750 B.C.  The Roman and the Byzantine Empires had strongholds here and faded away with the Norman conquest in 1081.  Corfu overthrew them, with the help of the Venetian Fleet in 1149.  The Venetians ruled here for over 200 years, hence the heavy Venetian influence in the architecture and the early political structure, leading it to be called the “Door to Venice.”  Then came the French followed by the British, all leaving their imprint on this international island.

The two fortresses here – the old and the new – both date back to antiquity from before Homer’s time and were used to defend the inhabitants of this island from Ottoman Rule. The Old Town is situated between them and is a wonder to behold – we drove and walked through the streets, the wide plazas, the university and the library buildings, the archways and stone filled alleys.  We talked about how it must have been to live here during these ancient times in these glorious buildings among such beauty. 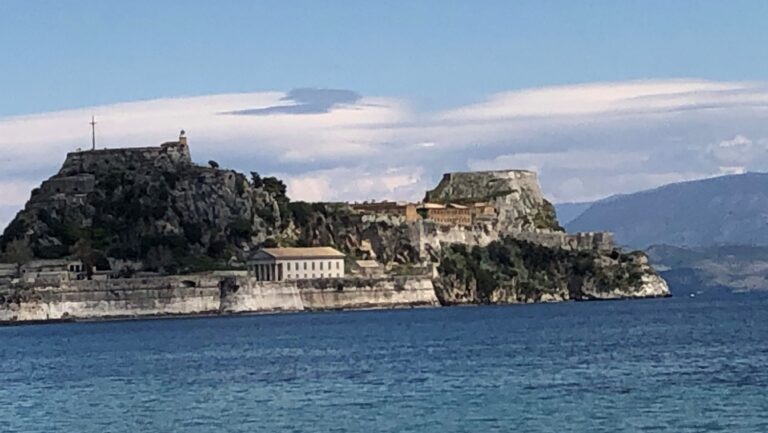 Stately three and four story homes and buildings in various shades of dusty rose, pink, mauve, lavender, violet, and lilac abound; strong, bold doors with intricate wrought iron railings around them and on the balconies above reflect the wealth of the owners.  The parks and public squares near the fortresses are surrounded by the colleges, libraries and government buildings – also resplendent in their size and color.  Throughout the island, even in tiny towns, these spring colors are the perfect setting among nature’s greenery and the pure, crystal blue of the Ionian Sea.  Intermingled throughout is an abundance of Wisteria – on homes, on trellises, on top of shops, along the road, at the front gate of hotels and my personal favorite on the archways leading into sweet gardens filled with flowers and vegetables –  the color of this plant fits in perfectly with the pastels you see all around the island.

We spent our mornings driving from one end of the island to the other.  Most of the roads are modern and fast, but we often went off road into small villages, secluded beaches and towns built way up in the mountains.  Every where we went the vistas were glorious…there is not a place on this island where you don’t have a view.  It could be a simple spot between the trees looking down at copper roof tops of the homes and teeny cobblestone trees; it could be a wide expanse of sand and beach; it could be the mountain top with a little white chapel on it.   The roads slope up and down the mountains and through farms and beach towns…we covered every inch of Corfu and will remember it all!

P.S. If you’ve missed some of my previous blogs documenting Zaf and I’s retirement kick-off in Greece, we’ve dedicated an entire tab just for you on the site. Where would you go to kick-off your retirement?

WHICH ONE WILL I BE? 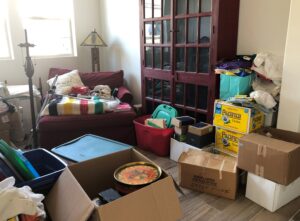 I THINK IT WOULD BE BETTER OVER THERE 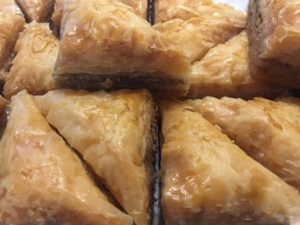